Under 2017 championship-winning captain Moana Mato, Cape Runaway’s finest have won four from four in the two-round race for the Rangiora Keelan Memorial Shield.

Gallant Hicks Bay were the latest to fall — 41-7 — to TVC in Game 1 of Saturday’s double-header at Te Araroa Domain.

The crowd of nearly 500 then witnessed a joyous exhibition of running rugby in a 58-10 win to the host club, 2020 champions Tokararangi, against Ruatoria City.

Hikurangi — The Maunga — beat Tokomaru Bay United 29-5 at Kahuitara on Saturday. It was their second win this season, their first being the 20-17 triumph over Hicks Bay at Kawakawa mai Tawhiti in Week 2 on April 3. Fans of the Rhys Walker-led Hikurangi know that the men of the mountain form a powerful, cohesive unit.

Heading into Week 6 of 7 in Round 1 for the Kath McLean Memorial Cup of Enterprise Cars Ngati Porou East Coast club rugby, TVC (19 competition points) are the team to beat.

Since March 27, they have taken their A game on the road to beat hard-nosed opposition at Hatea-a-rangi, Uawa Domain and Te Araroa Domain. Points differential places Tokararangi second above Uawa (both have 11 points), Hikurangi fourth above City (nine points) and Hicks Bay sixth above United (one point).

TVC’s capacity to ramp up the pace of the game as required while keeping the ball alive was, to their captain, a big factor in the win. TVC led 15-0 at halftime.

“For us, the key focus in the first round is our attack — we’ve scored 21 tries in four games,” openside flanker Mato said.

“Also, that was physical and both No.8s — Hoani Te Moana for us and Anton King for them — were tough.”

Hicks Bay coach Aaron King is unfailingly honest: “We got a bit of a touch-up in our first game for three weeks. TVC are disciplined and well-drilled. They started fast and poured it on in the second half. Our scrum was strong though; we didn’t get pushed around.

“Dylan Biddle started at loosehead prop and went to hooker for Jim Hovell in the second half, Josh King came on at loosehead after the break and veteran Aaron Reedy answered an SOS to anchor the scrum for us on the tighthead side. They fronted big-time.”

Coach King was most complimentary of the job done by referee Eruera Kawhia (ably assisted by assistant referees Troy Para snr and Melvin Ashford) in allowing the game to flow. 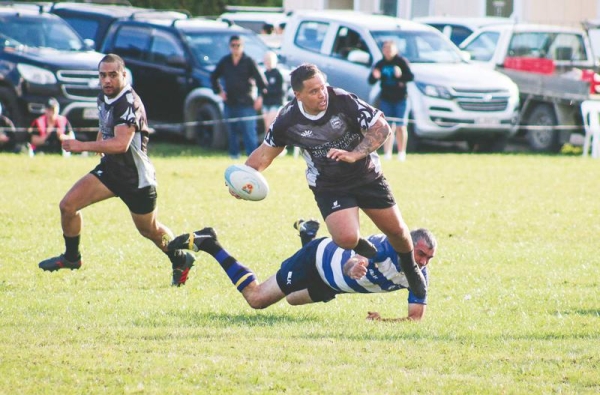 “Ride ’em cowboy” is an exhortation and Tokararangi — the defending champions of East Coast club rugby — found Ruatoria City an ornery beast to subdue, 58-10 scoreline or not, on Saturday.

Tokararangi led 36-10 at the break but their captain, openside flanker Hone Haerewa, relished every second of what was a rugged clash.

“That was a fast game,” he said. “They took an early lead, which woke us up, although we already wanted a big match effort because of the loss to TVC, but I’m much prouder of the effort the boys put in on the field on Saturday.”

Playing with the wind, City opened their account six minutes into the contest.

Six metres from the left corner on attack, left side of Te Araroa Domain, rake John Brown hit his mark in the middle of the lineout and immediately got the ball back to finish the drive with a try. No.8 Nathaniel Fox converted Brown’s try for 7-0.

Haerewa struck back for Tokararangi in the 11th minute. Referee Troy Para having awarded the hosts a penalty 10m in front of City’s goalposts, first-five Rapata Haerewa opted for the tap-kick, and found his skipper on the left side of the ground. Hone Haerewa then beat three men to score in the corner. His try was unconverted.

At the 15-minute mark, Tokararangi having been awarded a scrum-penalty five metres off the left touch, five metres short of the 22, Hovell chose to tap-kick the ball quickly. Four phases later, he picked the ball up from a goal-line ruck and powered over to score, for the lead, seven metres to the left of goal. On Rapata Haerewa’s conversion, Tokararangi went 12-7 up.

On 23 minutes, Samupo on a 30m break got a pass inside to Hone Haerewa, who hared 10 more metres to score. With the conversion from Rapata Haerewa, the home team led 19-10.

In the 29th minute, Tokararangi MVP, fullback Mohi Bartlett, gave possibly the best pass of the day, a flat, perfectly timed assist to Warnock, who scored for 29-10. Rapata Haerewa converted, for 31-10. With Kingi’s try right on halftime, the hosts led 36-10 at the break.

Six minutes after the resumption, Waitoa scored, minus the conversion for 41-10. In the 51st minute, the Tokararangi captain completed his hat-trick with a 37m dash down the left touch to score in the corner: with Rapata Haerewa’s sideline conversion, the score was 48-10.

In the 59th minute, he kicked a 40m penalty for 51-10. Hollis got the last try of the match three minutes from full-time: the big lock did superbly well to keep up with the play in support, and be on hand to score beneath the posts.

City are a good team and have played quality rugby since the competition began, including a 15-7 win against The Maunga in the Ruatoria derby at Whakarua Park last Saturday. But from the 20th minute onwards, they did not score v Tokararangi. Tokararangi dominated possession and put it to match-winning use for 80 minutes: the Lisa Muller-coached City will need to work out quickly what needs doing before their home game v Hicks Bay this weekend. Securing more ball and staying in touch will no doubt be at the top of the must-do list.

On a fine day at Kahuitara, a crowd verging on 400 (United coach Kuru Gray spoke of the visitors’ 12 car-loads of fans v 100 car-loads for The Maunga) took in a spirited showing by teams 4 and 7.

Hikurangi coach Matt Richards acknowledged United’s guts and grit: “They turned up to play and pushed us hard, but our boys didn’t expect anything less. We fought to keep our structure during that game, and have positives to now work on from it.”

Kuru Gray was pleased that despite United missing both regular captain Mike Chambers-Raroa and vice-captain Les Te Reo because of family commitments, his crew — as they had v TVC and Uawa — never gave an inch at scrum-time.

As old salt tighthead prop Aaron Reedy was a pillar of strength for Hicks Bay at set-piece, so too was legendary loosehead Reg McClutchie for the visitors.

“Reg came out of retirement and gave us 62 good minutes,” said Gray, whose outfit last called on The Maunga at their reinvested stronghold on June 8, 2019: Hikurangi won that, their centenary match, 84-5.

“The winning of the game — on turnovers, penalties — was the ruck. They were strong there.”

Gray also spoke well of the job, particularly communication-wise, done by referee Harawira Matahiki on his first game this season.