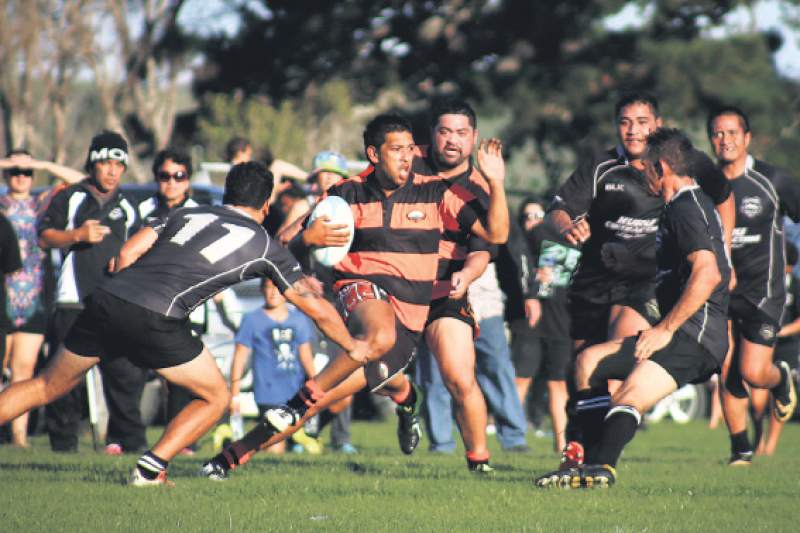 HIKURANGI players and truckloads of their supporters headed to Rangitukia to take on Waiapu in the fifth round of Ngati Porou East Coast club rugby on Saturday.

Waiapu took the initiative in the first 10 minutes and the game’s first try was scored by player-coach Tripoli Poi (at hooker), playing for the first time this season. First five-eighth Tojo Maaka converted.

Hiku hit back within five minutes with a penalty to Kris Palmer and a couple of minutes later second five Caleb Lewis levelled the score 8-all with a runaway try that was not converted.

The game settled into an even contest of large, effective forwards and skilled backs, with both teams playing like they meant it for most of the rest of the half.

Poi’s presence added to the effectiveness of the Waiapu scrum and ruck, and his straight throwing into the lineout worked well.

Of the backlines, Hiku’s inside grouping of first five Billy Manuel, second five Caleb Lewis — who played lock for Tawhiti last year — and Kareti Palmer was a particularly good combination.

Waiapu ill-discipline saw Hiku camp on their line and win penalty after penalty. And when staunch Waiapu prop Chris Haenga was sent to the sinbin in the 30th minute it seemed Hiku’s big men must score.

Hiku No.8 Taneatoa Parata brought them together and Joey Keelan and Horace Lewis made ground in bursts but the Waiapu defence was desperately strong, and after 10 minutes under assault, Maaka cleared for Waiapu.

By halftime Hiku were dominating although it was still anyone’s game to win.

They were superior at scrum time better in second phase and loose play, and showing good discipline.

Hiku’s veterans showed how it’s done soon after the break. Second rower Horace Lewis burst away from a ruck, ran 35 metres up the guts, passed to Charlie Harrison, who flicked the ball to Jesse Tuala to score. Copybook stuff.

The next 10 minutes belonged to Hiku. Their next try resulted from a kick-and-chase by Parata. They went further ahead when the ball was kicked straight into the arms of first five Billy Manuel, who moved it on for halfback Karauria Keelan to score. Fullback Kris Palmer kicked the conversion from near the sideline to put his side 26-10 ahead.

Waiapu, however, weren’t about to give up and following a break by Maaka, Waiapu captain and No.8 Perrin Manuel scored.

Conversion from out wide
Hiku struck back with a try to Kris Palmer, which he converted from out wide. Having such a reliable kicker as Palmer is a big plus. He is worth his weight in gold.

Waiapu had the last say when Perrin Manuel burst through for a try on fulltime.

Both teams can take a lot from this close game. Ball skills and defence were right up there.

Praise must go to those who look after George Nepia Memorial Park. It must be the best playing surface on the Coast at the moment.

The club rugby day at Uawa Domain began with Uawa under- 6s playing Eastland Vets Ngatapa White and ending with the senior club game between Ruatoria City and Uawa.
City were fresh from two weeks without a game while Uawa had three straight wins under their belts.

The visitors came out strong but were often unable to finish moves while Uawa were quick to pounce on the loose ball.

Home side lead
By halftime the home side led 12-0.

City began the second half strongly with tries to George Walker and Tony Walker. It was a close tussle at times and both teams scored two tries.

Uawa spokesman Sean Paonanaga said Uawa had a few problems in the scrums but he felt their fitness won them the game.

n Over at Whangaparaoa, TVC got back in their stride with a 58-6 win over Hicks Bay.

Hicks Bay dominated the first 10 minutes with strong forward play but from there TVC used their backs to set up kick-and-chase rugby.

And Tokomaru United proved too strong for Tawhiti at Tokomaru Bay Domain, running in nine tries in a 66-0 whitewash,